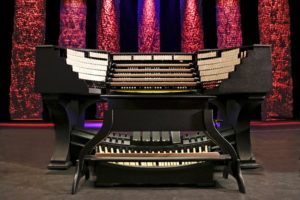 The Marshall & Ogletree George W. Mergens Memorial Organ, a gift from Alex W. Dreyfoos, was custom-designed for the Kravis Center and made its premiere on March 9, 2016. The one-of-a-kind, $1.5 million digital organ features the world’s most advanced technology, with an impressive ability to intensify sounds to an entirely new level.

With 5 manuals, more than 200 stops and 96 audio channels, the Marshall & Ogletree Opus 11 Digital Organ is capable of reproducing approximately 18,000 different sounds digitally recorded from the finest pipe organs around the world. The first organ of its kind to be installed and featured in a performing arts center worldwide, it commands nearly 300 high-definition sounds sampled from 35 American pipe organs and has the biggest sound system of any instrument that Marshall & Olgetree has ever built.

Named in honor of Alex Dreyfoos’ longtime friend and business partner, George W. Mergens, the organ permanently resides at the Kravis Center where it can be utilized in Dreyfoos Hall and Rinker Playhouse, Dreyfoos with 96 speakers and Rinker with 24.

The Kravis Center is located near downtown West Palm Beach and is easily accessible via I-95 and the Turnpike. Complimentary self-parking and paid valet parking is available.